The following paintings can be also acquired through this on-line gallery. For direct information about artwork availability and price, please use the contact form.

FIESTA. Oil on canvas; cm.60×90; 2017.
Fiesta is simply inspired by a few touches of my best quality red color. I applied it on the canvas because I had accidentally squeezed too much of it on my pallet while working on another painting. After a few months I decided to proceed keeping it simple: I just added some more colors guided by pure chromatic feelings and by the music I was listening. Day after day the composition evolved into the actual painting.
Fiesta is a painting transmitting the happiness of the dance and the colors of youth. 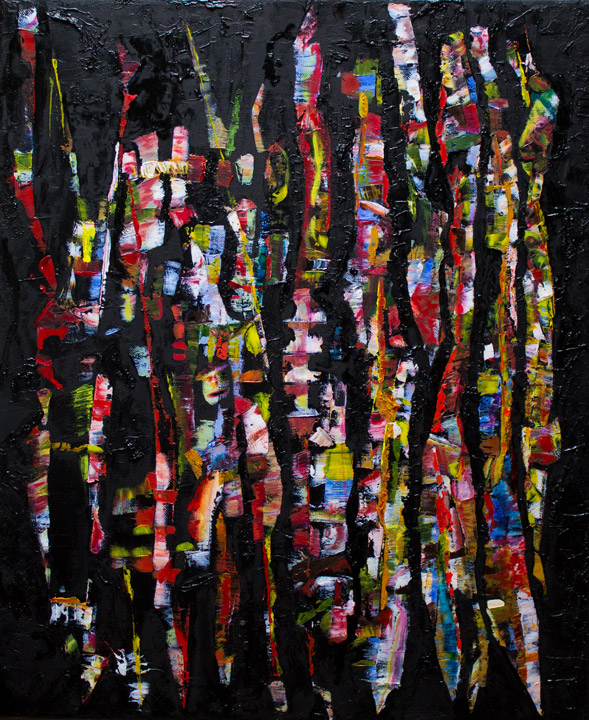 CLOSER. Oil on canvas; cm.60×50; 2017.
A black textured background crossed by vertical irregular multicolored elements. Inside the poly-chrome surfaces, several characters, painted with different degrees of abstraction, are waiting to be discovered and connected by the viewer.

La Loire. Oil on canvas; cm.50×60; 2016.
… once you are nearby Angers, take some time to pay a visit to a famous French river: the Loire. Forget the castles and concentrate on the multiplicity of micro environments displayed in front of your eyes. Then go home and try to recall what you have seen… COSMO [κόσμος] ; oil on canvas; cm.120×120; 2016
Cosmo is based on small watercolors I make when I travel. The painted landscape doesn’t exist (as long as I know). The red guidelines derive from another landscape you can see on this page: Anamorphosis (the right one in the diptych). Cosmo is inspired by the classic dualism Cosmos vs Chaos. An abstraction of the first characters of the Greek theogony is visible as well.
This is the third landscape I make in this size and with this perspective construction. As I did for the first two, I hope this painting will help the viewer in figuring out his own cosmos. 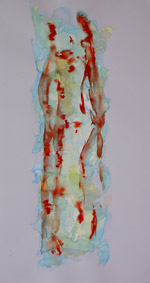 “HI, HE, SHE, WE”; watercolor on paper; cm.60×30; 2010
The beauty of watercolor is in the velocity. Watercolors are transmitting a strong perception of the uniqueness of the very moment. You must be concentrated, that piece of paper is as expensive as a meal. If you fail, your concentration will possibly leave. But sometime and hardly ever, a watercolor will make your day.

“No tears for Jack”; oil on canvas; cm. 70x70x2,5; 2012
My atelier is located at the top floor of a building facing a city park. I work “surrounded” by many different sort of birds. Birds are on the roof, in the air and on the water downstairs.
In “No tears for jack” there is a sort of happy social interaction among the figures on the canvas. Probably that is the reason you don’t get tired of having it hanging on your walls.
The simplicity of the subject together with the brightness of the colors and the just mentioned “sociality”, make this painting suitable for spaces where children spend their time.
When (a couple of years ago), a similar composition with birds flew to Austin I decided to repaint it. A character of that painting was crying, Jack isn’t.

“Ombre rosse”. Oil on canvas on cardboard; cm. 25×30; 2015
In early 2015 I was trying and reducing my colour palette to the very ancient one. Among the many tried efforts , there is this little and powerful painting which found his title in my ancient memories.
The painting’s title is the same used in the Italian version of a classic movie :“Stagecoach”. Dated 1939 and directed by John Ford the film was freely inspired by Guy de Maupassant’s “Boule de Suif”.
I must admit I only recently learned about the original French text. However it is quite funny how that text evokes possible contemporary sceneries.
War occupies our television screens for several reasons. It is up to the viewer to decode the purpose of those images. The same viewer has the right and (hopefully) the capacity of decoding all the paintings of the world in order to get his own title.

“Anamorphosis_il mondo delle idee”; Diptych; cm.120×240; 2012-2014
You can turn it as you like
Which is wrong and which is right
Most important for the knight
Is that we don’t get a fight

“Golden doors”; Oil on canvas, cm.50×60, 2014
This painting is inspired by some facades you can find in Holland and other countries in the neighborhood . This kind of facade is named “Trapgevel” (stair facade). Although these buildings can mostly be found in cities, I let them grow in the nature. The flat man-made dutch nature. The buildings are kissed by gold. Only two of them are reached by a road.

“Reality”; oil on canvas; cm.50×60; 2012
“Reality” is a layered composition showing a group of people on a hill facing an island. The figures are walking and looking for eatable wild vegetables. Hope is keeping them together. You can see the figures only if you pay attention.